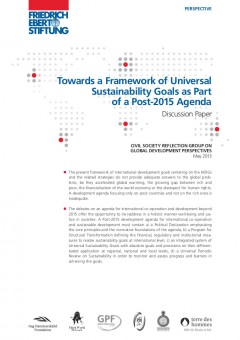 The debates on an agenda for international co-operation and development beyond 2015 offer the opportunity to (re-)address in a holistic manner well-being and justice in societies. Given the economic, social and ecological challenges in the world, this is urgently needed.

The present framework of international development goals centering on the MDGs and the related strategies do not provide adequate answers to the global problems, be they accelerated global warming, the growing gap between rich and poor, the financialization of the world economy or the disrespect for human rights. Given these problems we require changes in the economic and social systems. A development agenda focusing only on poor countries and not on the rich ones is inadequate.

This does not mean such an agenda should prescribe top-down identical goals, responsibilities and political recipes following a one-size-fits-all approach. A future development agenda ought to be based on common principles providing for a differentiation of countries according to their economic performance, social needs and ecological responsibilities. Similarly, the agenda ought to contain a differentiated catalogue of political commitments. Embedded between the general principles and the political implementation measures, Universal Sustainability Goals would be an essential albeit one element of the Post-2015 Agenda.

The discussions about any Post-2015 Agenda must address the structural obstacles and political barriers that prevented the realization of the MDGs. Without an honest assessment of these obstacles and barriers any so called »new« development goals will remain a paper tiger

Published by: the Friedrich-Ebert-Stiftung and the Civil Society Reflection Group on Global Development Perspectives