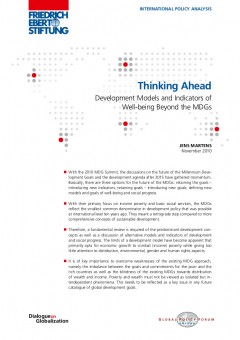 Cover
Development Models and Indicators of Well-being Beyond the MDGs

Over the years since the Millennium Summit, the MDGs have proved to be an instrument of development policy that is both effective as publicity and suitable for campaigns. They are easy to understand and to communicate to a broader public. The civil society and UN campaigns on the MDGs have contributed to enhancing public awareness of the problems of poverty and hunger in the countries of the South – including not only those people especially concerned with development. Under the guiding motto of the MDGs, the UN, IMF, World Bank and OECD have overcome inconsistencies among their diverging development concepts and strategies – or at least they have managed to cover them up. Thanks to their unambiguous quantitative and timebound targets and the political commitments they entail, the MDGs provide a set of instruments to increase accountability of governments towards the people and check the effectiveness of their policies – in North and South. However, the last ten years have also shown up the problems linked to focusing the development discourse on combating the most extreme forms of income poverty and hunger and providing basic social services for the population. The MDGs bear a number of weaknesses and deficits resulting in terms of both their conception and their implementing strategies. The discussion about the Post-2015 Development Agenda, i.e. about the question what the future of the MDGs is going to look like after the year 2015, will have to yield answers to these weaknesses and deficits.