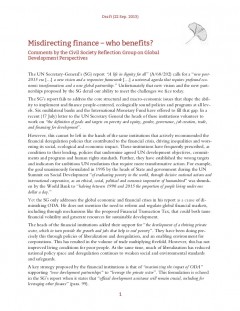 The UN Secretary-General’s (SG) report “A life in dignity for all” (A/68/202) calls for a “new post- 2015 era […] a new vision and a responsive framework […] a universal agenda that requires profound economic transformations and a new global partnership.” Unfortunately that new vision and the new partnerships proposed by the SG derail our ability to meet the challenges we face today.

The SG’s report fails to address the core structural and macro-economic issues that shape the ability to implement and finance people-centered, ecologically sound policies and programs at all levels.
Six multilateral banks and the International Monetary Fund have offered to fill that gap. In a recent (17 July) letter to the UN Secretary General the heads of these institutions volunteer to work on “the definition of goals and targets on poverty and equity, gender, governance, job creation, trade, and financing for development”.

However, this cannot be left in the hands of the same institutions that actively recommended the financial deregulation policies that contributed to the financial crisis, driving inequalities and worsening its social, ecological and economic impact. These institutions have frequently prescribed, as condition to their lending, policies that undermine agreed UN development objectives, commitments and programs and human rights standards. Further, they have established the wrong targets and indicators for ambitious UN resolutions that require more transformative action. For example, the goal unanimously formulated in 1995 by the heads of State and government during the UN Summit on Social Development “of eradicating poverty in the world, through decisive national actions an international cooperation, as an ethical, social, political and economic imperative of humankind” was shrunken by the World Bank to “halving between 1990 and 2015 the proportion of people living under one
dollar a day.”

Yet the SG only addresses the global economic and financial crises in his report as a cause of diminishing ODA. He does not mention the need to reform and regulate global financial markets including through mechanisms like the proposed Financial Transaction Tax, that could both tame financial volatility and generate resources for sustainable development.

The heads of the financial institutions added their support for “the development of a thriving private sector, which in turn provide the growth and jobs that help to end poverty”. They have been doing precisely this through policies of liberalization and deregulation, and an enabling environment for corporations. This has resulted in the volume of trade multiplying fivefold. However, this has not improved living conditions for poor people. At the same time, much of liberalization has reduced national policy space and deregulation continues to weaken social and environmental standards
and safeguards.

A key strategy proposed by the financial institutions is that of “maximizing the impact of ODA” supporting “new development partnerships” to “leverage the private sector”. This formulation is echoed in the SG’s report when it states that “official development assistance will remain crucial, including for leveraging other finance” (para. 99).

Contrary to the perception that leveraging actually draws in private resources to available public funds, increasingly it is about using public money (ODA) to cover the risks of private investment.
Losses will be socialized while profits continue to be private – and too often untaxed. Recent experience in many countries shows that these ‘innovative’ mechanisms are often ineffective, poorly regulated, and can lead to corruption in borrowing and lending countries.

These mechanisms do not avoid debt risks. Experience has shown that with or without a government guarantee, public finances might have to ultimately cover potential losses of investors.

Independent assessments show that the leveraged investments do not support small and medium enterprises that create jobs, but rather subsidize investments by big corporations from donor countries, many of them of doubtful development merit. Only 25% of all companies supported by the European Investment Bank (EIB) and the International Finance Corporation (IFC) of the World Bank, between 2006 and 2010, were domiciled in developing countries.