Goals for the Rich 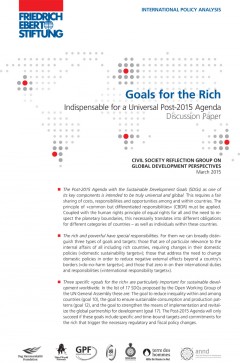 The Post-2015 Agenda with the Sustainable Development Goals (SDGs) as one of its key components is intended to be truly universal and global. This requires a fair sharing of costs, responsibilities and opportunities among and within countries. The principle of »common but differentiated responsibilities« (CBDR) must be applied. Coupled with the human rights principle of equal rights for all and the need to respect the planetary boundaries, this necessarily translates into different obligations for different categories of countries – as well as individuals within these countries.

The rich and powerful have special responsibilities. For them we can broadly distinguish three types of goals and targets: those that are of particular relevance to the internal affairs of all including rich countries, requiring changes in their domestic policies (»domestic sustainability targets«); those that address the need to change domestic policies in order to reduce negative external effects beyond a country’s borders (»do-no-harm targets«); and those that zero in on their international duties and responsibilities (»international responsibility targets«).

Three specific »goals for the rich« are particularly important for sustainable development worldwide. In the list of 17 SDGs proposed by the Open Working Group of the UN General Assembly these are: The goal to reduce inequality within and among countries (goal 10), the goal to ensure sustainable consumption and production patterns (goal 12), and the goal to strengthen the means of implementation and revitalize the global partnership for development (goal 17). The Post-2015 Agenda will only succeed if these goals include specific and time-bound targets and commitments for the rich that trigger the necessary regulatory and fiscal policy changes

Find out more in the new discussion paper for the Reflection Group on how nobody should be left out of the Post-2015 Agenda. Not even the rich.

Goals for the Rich